Many of you have been hearing or reading in the news the discussion on what is referred to as the “Fiduciary Rule.” A version of the Fiduciary Rule was originally proposed in 2010 by the Department of Labor (DOL), then quickly withdrawn amid great protest in the financial industry. Essentially, the concept is and was to overhaul ERISA (Employee Retirement Income Security Act)—originally enacted in 1974 to regulate the quality of financial advice surrounding retirement. In 2015, President Obama reintroduced the concept, explaining, “It’s a very simple principle: You want to give financial advice, you’ve got to put your client’s interests first.” In April of 2016, the final rulings were issued and were slated to phase in from April of 2017 to January of 2018. In the headlines as of late is that effective with the new administration, a bill has been introduced as well as a presidential memorandum that will most likely delay the rule’s implementation in a move that many believe will materially change, if not eliminate, the ruling.

The crux of the matter is that dating back to 1974, and even earlier in other forms of rules and legislation, the government has worked to enact standards, laws, regulations, rules and guidelines to protect consumers and investors. One of the strongest ways to do that is to require the professionals that give financial advice and manufacture investment products to always ACT IN THE BEST INTEREST OF THE CLIENT. That, in essence is at the heart of the Fiduciary Rule.

Carlson Capital Management has provided wealth management to clients under a fiduciary standard of care for many years. Acting as a fiduciary is truly at the core of our relationships, processes, decision making, advising and culture. In our view, the Ruling as proposed doesn’t even go far enough since it applies only to retirement (ERISA) plans. We would support a rule that requires adherence to a fiduciary standard for all investment professionals, not just those who advise on retirement/ERISA plans. Quite frankly, we cannot imagine why the whole industry has not been required to follow the fiduciary standard in all financial planning matters. Why wouldn’t an investor/client deserve to be guided in a manner that is in their best interest?

While we are monitoring the news about the Rule, clients of Carlson Capital Management should be clear on the fact that while we advocate the broadening of fiduciary standards as required by the Rule, its enactment would/will have little impact on CCM. Registered Investment Advisors (RIAs), by the nature of choosing to offer clients advice in a transparent, independent, fee-based manner, uphold fiduciary standards as inherent to the way we do business. It is one of the key differentiators in the way we work with clients versus our “competitors” who are not RIAs.

Fiduciary standards are of such importance to us that each year, we voluntarily go through an independent third-party assessment by the Centre for Fiduciary Excellence (CEFEX) who evaluate our adherence to the industry’s best fiduciary practices. In 2007, we were one of the first investment advisors globally to complete the CEFEX process.

What the Fiduciary Standard Means for our Clients
(and our Colleagues)

The following values are at the core of our fiduciary commitment at CCM. They are “why” a fiduciary standard is so important to us.

As a father of three daughters, and a founder of a company with now over 40 colleagues, I have always tried to instill a culture and ethic of honesty and integrity. I have shared this creed often, “If you always tell the truth, you never have to remember what you said.” In essence, each interaction builds upon always telling the truth. That same logic and creed applies equally to the fiduciary standard— “If we always act in the best interest of our client, we never have to look back and wonder what we did, for whom we did it and why we did it.” In our next, and every interaction, we just need once again to act in their best interest. The fiduciary standard is one we deeply believe in for our clients and colleagues as we deliver the CCM Experience and build an authentic wealth management firm. 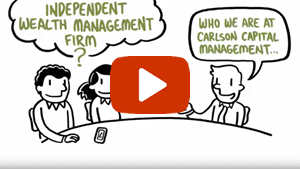 What is an Independent Wealth Management Firm? This four minute illustrated video clip explains how, as an independent firm, we apply a fiduciary standard and an integrated platform to provide our clients with a Unique Approach to Wealth Management.

Fiduciary Matters: Relationships of Trust, an informative paper outlining the role of a fiduciary within a wealth advisory relationship.