Over the holidays, I sat at our kitchen table after breakfast, drinking coffee and reading the paper while my five-year-old rolled, sculpted, and ultimately smashed flat the hot pink Play-Doh that Santa so generously left in her stocking Christmas morning. As her wonderfully messy creative expression came out through this oh-so familiar medium, I commented to her that it would be easy to read her palm with all the lines and creases of her hands so brightly illuminated. Not surprisingly, her response was, “Why would you look at my palm?” And so, after some back and forth about fortune tellers and whether they can truly predict what’s to come based off of lines on palms or crystal balls, she asked, “Daddy, can you see the future?” As much as I wanted to extend the magic and mystique of the holiday season into my own ability to know what the future was going to bring, I honestly replied, “No sweetheart. No one can really see the future.”

The irony of the timing of that conversation was that while I was telling my daughter that a certain type of magic didn’t actually exist, I was about to read the annual “Investors’ Roundtable” in the business section of the Minneapolis Star Tribune. 1  For those of you who may be unfamiliar, this annual feature article is similar to many such pieces written in business publications this time of year where a small group of prominent investment professionals are brought together to review the headline events from the past year and provide their own crystal ball predictions on the year to come. Almost without fail, these articles start with an explanation as to why their predictions from the previous year didn’t come through as forecasted and conclude with each soothsayer giving their prophecy for the level of a given stock market index one year in the future. Even though we all know that it’s impossible to see the future, it’s hard not to want to believe an exception may exist and get drawn into the dream.

Unfortunately, that dream falls short of reality again, as you might expect, with the surprisingly strong and stable year for stocks in 2017 (see chart below, S&P 500 Growth of Wealth in 2017), much of part one of the article was spent explaining how the unexpected events and lack of volatility of the year led to the inaccuracy of their guesses from the year before. Their responses this year seemed to say that their assumptions and estimates were spot on for 2017, it’s just that the broader global financial system didn’t comply within those parameters. In fact, the highest estimate from the end of 2016 was less than half of the actual 21.83% return that the S&P 500 index returned in 2017. Further, the VIX (Chicago Board Options Exchange Volatility Index) hit an all-time low in November. In fact, the year was so stable it was only the second year since 1984 that the S&P 500 did not finish a trading day lower than where we started the year. Even with the experience of specific market forecasts missing the mark year after year, the article concludes with nine predictions that outline exactly why the stock market will end 2018 at a particular level. 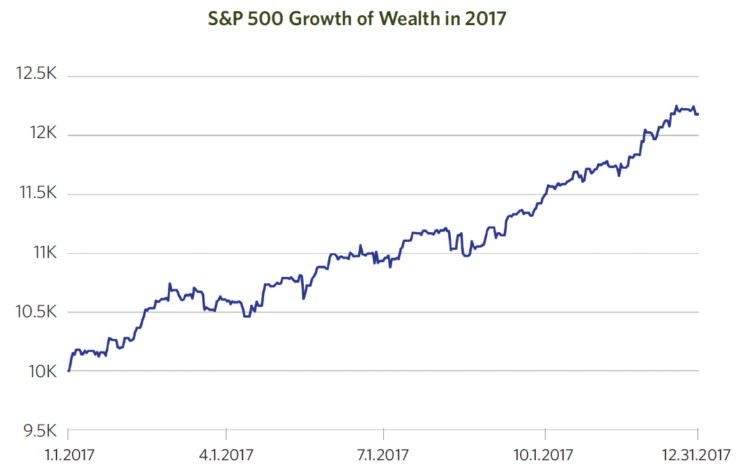 Data represents past performance. Past performance is no guarantee of future results. Chart is for illustrative purposes only. Chart source data is the S&P 500 Index from January 1, 2017–December 31, 2017.

Sprinkled throughout the article, and seemingly everywhere in the financial press in 2017, was one of the biggest surprises and headline grabbers from the past year: the explosion in the value of Bitcoin and other cryptocurrencies. If stock market or interest rate predictions aren’t your thing, there are no shortage of pundits making the case for extreme outcomes of these relatively new financial instruments. Compelling headlines touting the success of newly minted millionaires and billionaires or tales of woe, such as the one about the unfortunate IT worker who lost more the $100 million of value when he accidentally threw away an old hard drive 2  draw us in and may make us want to believe in lightning in a bottle. With predictions of the value of a bitcoin ranging from as high as $1,000,000+ to as low as $0 for 2018, 3  it’s hard to get a grasp on what to expect in terms of future returns from something that has no real intrinsic value like a stock or a bond without earnings or the promise of interest payments. We share a look into the fundamentals of both sides of the argument in a new article posted here, but at this time, the incredible volatility, high transaction costs, security risk, and lack of a clear expected return don’t make cryptocurrencies something that can be well argued to be anything other than a highly speculative bet.

It’s here that I want to acknowledge I don’t intend to imply or project hubris on the Twin Cities investment professionals featured in the 2018 Investors’ Roundtable article. I imagine that none of them would actually stake their reputation on a specific stock market level at the end of 2018. I will concede that they are not likely participating in the exercise to demonstrate their ability to read tea leaves or companies’ cash flow statements.The point is more about noting the vast prevalence of such data and information, and the importance of not allowing such predictions to influence one’s investment strategy.

At CCM, we continually share the tenants of our core investment philosophy with you, not knowing when one country or strategy will specifically be on top, but with the knowledge that those details are unknowable and not under our control. Being able to accept that, we are all more likely to get from here to wherever it is we want to go. For example, when I wrote about the impact of currency on international equity holdings and the importance of avoiding high cost products that hedge the impact of exchange rates from your stock portfolio, I didn’t know with any certainty that due to a weakening dollar in 2017, that currency returns would add in some cases double digit benefits to your international stocks holdings. 4  I also didn’t know that more than 20 of the funds that were created to hedge the impact of currencies would close over the past year. 5  We simply knew that avoiding excessive costs in “products” was going to be more beneficial than guessing which way exchange rates are headed. Additionally, when quarter after quarter we’ve talked about the importance of global diversification, we had no certainty that after three years of negative returns, emerging markets stocks would post back to back double-digit growth with 2017 returns in excess of 36%. We simply knew that over time, countries and economies will behave differently in different environments and it’s important to be well positioned to take advantage of these benefits. Lastly, entering this past year there was concern by many in how perceived and real geopolitical instability may negatively impact their financial lives. Rather than pulling out of stocks, avoiding the risks and sitting on the sidelines to see what would happen, we worked with clients to make sure that financial plans were updated and that safety of capital in the appropriate amount of fixed income was in place, and we were all able to participate in the strong gains brought by the 2017 equity markets.

1. startribune.com Local financial analysts predict a strong year in the markets
2. metro.co.uk  Man threw away laptop with bitcoin that is now worth £74 million
3. fortune.com How High Can Bitcoin’s Price go in 2018?
4. Source: Morningstar Direct, as of 12/31/17
5. etf.com Record ETF Closures, Healthy Launch Levels

Sign up here to receive CCM articles and updates by email: