The biggest financial news of this past quarter actually came on July 5th when the Greek population voted “no” to a package that traded increased, on-going austerity for economic continuity and stability within the Eurozone. As of the writing of this newsletter, the financial situation in Greece and its future relationship within the European Economic Community have been in the news daily with the future of the Greek economy hinging on the ability of politicians, economists, and citizens to find a solution to the long-standing problem of high debt levels and low-economic productivity. While the population of Greece is less than 11 million people (roughly the population of Ohio) and its stock market valuation is less than one-half of one-tenth of one percent (very tiny), its current situation greatly impacts the psychology of the markets. One way the European Central Bank has been maneuvering to keep the shared currency intact throughout the economic turmoil over the past few years has been through changes in monetary policy and the influencing of interest rates. Much of the talk in the US has been around what impact a destabilized Eurozone would have on our economy and whether the Federal Reserve Bank will follow through on their proposed interest rate hike later in 2015.

It seems that a day hasn’t passed during recent years without some sort of discussion or speculation about the future movements of interest rates. These conversations are occurring as much on main street as they are on Wall Street, given how interest rate levels can impact an individual’s financial situation while also having the influence of shifting the policies of a large investment bank or a multinational corporation. Interest rates influence the prices we all pay when we spend as well as the rates that we earn when we save. Given that very little in our current financial system goes without being influenced in some way, shape, or form by a few digits followed by a “%,” it’s important to be aware of how interest rates are influenced and what you can do to benefit when rates are high or low.

Most conversations involving interest rates also mention the Federal Reserve Bank (Fed) or one of the other policy making central banks around the world (i.e., Bank of Japan, European Central Bank, Bank of England). These economic bodies don’t have total control over all global interest rates per se; they do, however, exert immense influence in the base rates of their particular economies and can extend their influence to open markets by buying and selling securities.

For example, a subset of the Federal Reserve Bank known as the Federal Open Market Committee (FOMC) is responsible for setting the Federal Funds Rate, which is the rate at which banks can lend to each other overnight. The lower (higher) this rate is, the lower (higher) other interest rates in the open market will tend to be. In an effort to stimulate the economy and maintain order, the Fed drove this rate down to a target of 0.00% – 0.25% during the worst of the global financial crisis.

Due to the extraordinary nature of the crisis, the Fed also extended their power beyond setting the Fed Funds Rate at 0% by entering into three periods of quantitative easing (QE). During these periods, they applied the principles of supply and demand by actively purchasing US treasury and asset-backed securities in large quantities in an effort to increase their prices—resulting in pushing interest rates down and keeping them there until, in their minds, the economy has sufficiently recovered.

Like the impact that the Fed had in their bond buying program to increase demand and lower rates, the same principles of supply and demand apply to all markets. When fears increase about Greece or any other country (or corporation) not being able to repay its debts, the demand to own these securities at their current prices tends to go down which, typically has the consequence of reducing prices and raising yields until the relationship between risk and return is back into balance.In other words, when investors find bonds that are paying higher yields than similar securities, it’s not a signal of a free lunch but rather an indication of higher expected risk.

With the end of these QE periods being reached in October of 2014, and the economy recovering to some semblance of normal, it has been an expectation that an increase in the Fed Funds Rate would be next. The FOMC has long targeted a 2015 date to increase the base rate, but have not yet had the conviction that our economy, as well as those of other countries around the world, are strong enough to make the shift. Regardless of when the move finally happens, we know that we have our clients’ financial plans in position to handle the changes that may come.

Until that point in time in which interest rates actually increase, regardless of the level of interest rates across the economy, there are ways for you as our clients to benefit. Following the global financial crisis period with interest rates low, we have worked with those with outstanding debt to consolidate, restructure, and refinance in order to reduce their long-term costs and increase their future opportunities. And, knowing that interest rates will eventually rise, we have maintained the discipline to seek out solid fixed income investments through TIAA-CREF and keep focused on globally diversified short term and high quality bonds. These strategies have been tested during brief yet sudden periods of increasing rates like we saw in 2013, and they have helped to reduce volatility and maintain portfolio value. To illustrate how such a shift may impact the value of short, intermediate and long-term bonds, the chart below shows simulated price changes based on a 1% change in interest rates.

So what do we recommend during this period of awaiting rate movements, while closely watching activities in the Eurozone? Remember that uncertainty can cause volatility and expect that. Talk with your CCM advisor if you haven’t already leveraged opportunities outside of your portfolio related to debt management. And, in general, to borrow from the British, “keep calm,” and remain focused on the long-term view. 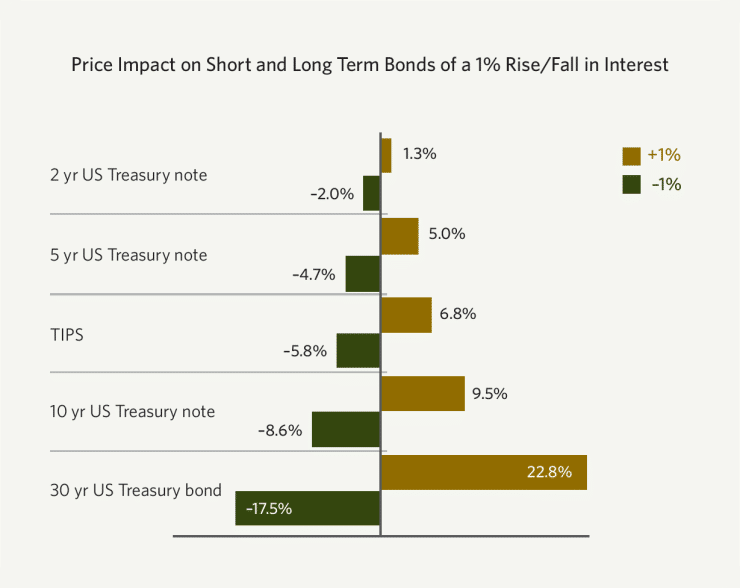 Data represents past performance. Past performance is no guarantee of future results. Chart is for illustrative purposes only. Calculation assumes 2-year Treasury interest rate falls 0.64% to 0.00%, as interest rates can only fall to 0.00%. Source: JP Morgan 3Q Guide to the Markets®, June 30, 2015, slide 36. jpmorganfunds.com