This past quarter marked the passing of the only major leaguer to have won a World Series ring for each of his fingers. Along with that honor (and many other incredible feats as part of the greatest dynasty in modern sports), Yogi Berra was also known as one of sports’ greatest “philosophers.” Since his death, there have been numerous pieces written reflecting on the best of the best “Yogi-isms” —connecting them with topics as diverse as politics to fly-fishing to investing. After reading many of these sometimes silly and other times elegantly genius quotes, the one above really stuck with me as I thought about this past quarter.

With the turning of the calendar from June to July, investors around the world were on the edge of their collective seats awaiting news of the next move in the anxiety-laden Greek debt bailout fiasco. World markets gyrated wildly with every new yes or no vote and predictably recoiled from the massive uncertainty around how the European Union and European Central Bank would handle the troubled economic state. Fears rose about how a possible removal of Greece from the shared currency would impact the global economy.

Investors also had their sights set on the September meeting of the Federal Reserve Bank’s Federal Open Market Committee (FOMC) and on what many thought was the high likelihood of an increase in the Federal Funds Rate. The expectation was that markets were going to be unhappy when the ‘inevitable’ happened and rates began to move higher from zero.

Now imagine yourself back at the beginning of July facing these two looming economic uncertainties and being offered the chance to make a wager on whether the world stock market would be higher or lower in October than it was at that moment. There would likely be some takers and some who would walk away from such an offer given the level of uncertainty of future outcomes.

Now imagine the same scenario, but this time you knew how these two events would unfold. You would know with certainty that support for Greece would come from its neighbors, and its economy and people would not be facing removal from the Eurozone. You would also know with certainty that the FOMC would not have increased rates—keeping interest rates and the cost of borrowing at historic lows. With the uncertain outcomes now certain, and with both resolutions being more positive for stock prices, I would venture to guess that there would be many more takers willing to confidently predict the future now that some of it had been perfectly laid out in a crystal ball.

Unfortunately, you may now see the wisdom in Yogi’s words. Stocks across the globe ended the third quarter sharply negative even though we’d moved on from an ailing Greece and we’re not dealing with skyrocketing interest rates. In fact, interest rates on ten-year treasury notes are actually down significantly from the summer months. The “perfect” information of the future that helped our past selves be so confident in our wager wasn’t in fact perfect at all. It simply gave us two data points in the always changing dynamic systems that are the world markets. The term ceteris paribus, which translates loosely from Latin to mean “all else being equal” is key to understanding that concrete conclusions about the future based on individual pieces of data are relevant only for an instant; for in the next blink, new events and new information (in this case concerns about a destabilized Chinese economy and concerns about growth and commodity prices) enter into the equation and are factored into prices. Predicting the future is in fact a very difficult endeavor.

Another Yogi-ism that fits the mood of the past quarter is, “It’s déjà vu all over again.” With the exception of international developed market small cap stocks, most stock indexes turned negative for 2015 by the end of September. The drop in markets from the highs reached earlier in 2015 brought us into official “correction” territory—the first since 2011. (A correction being defined as a 10% decline from previous highs.) This type of volatility may seem familiar—as market declines remain in our collective memories as investors much longer than periods of growth. It may also feel like déjà vu because this type of intra-year decline happens often.

The chart below illustrates annual returns of the S&P 500 in the bar chart and the maximum decline in each given year by the red dot. With many of these dots well below correction levels, it’s clear that market volatility has been present in the past and it will be present in the future. Accepting this risk is one of the main reasons that stocks have higher expected returns than bonds. 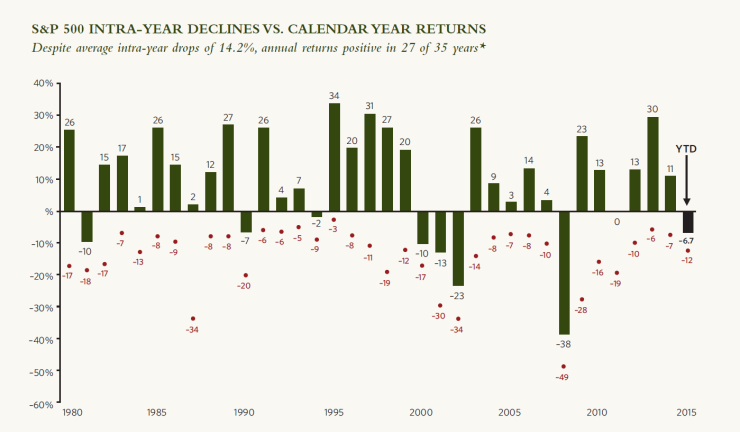 Data represents past performance. Past performance is no guarantee of future results. Chart is for illustrative purposes only. Returns are based on price index only and do not include dividends. Intra-year drops refers to the largest market drops from a peak to a trough during the year. *Returns shown are calendar year returns from 1980 to 2014 excluding 2015, which is year-to-date. Source: JP Morgan 4Q Guide to the Markets®, September 30, 2015, slide 12, jpmorganfunds.com

In a recent article that can be found on the CCM website,Weston Wellington of DFA outlined some further historical context for market corrections. When examining the 28 market corrections in US stocks since 1926, what we see in the data on average following these periods is a sharp increase in future short-term returns relative to long-term averages. Declining prices have the impact of actually increasing expected returns. There is no guarantee that a correction won’t turn into a bear market, but as long as we prepare prudently by improving your tax situation (harvesting losses) and repositioning your portfolio to buy stocks at lower prices after taking profits when they were growing, you’ll be better positioned for the future. And, ensuring that you’re sticking to your previously set financial plan, despite volatility in the markets, will ensure you don’t end up “someplace else” to again quote Yogi—“If you don’t know where you are going, you’ll end up someplace else.”

Sign up here to receive CCM articles and updates by email: