The 118th U.S. Open Championship will be held this month at Shinnecock Hills Golf Club, located in New York. The second major tournament of the year is known for pairing an intensely competitive group of players with an extremely difficult golf course. Unlike most tour events, it’s not uncommon for the champion to be above par for the entire tournament. Although the world’s best golfers are attracted to the tournament for its storied tradition and the prestige of winning one of golf’s four majors, there’s also the allure of a very large winner’s purse. The 2018 U.S. Open Championship awards the winner $2,160,000, the largest championship prize on tour.

When we have an event that combines this high level of competition, difficult playing conditions, and strong motivation to perform, it creates the perfect environment for a terrific event as well as a great learning opportunity for investors.

The same lesson is taught year after year; that past performance is not indicative of future results. To demonstrate this lesson we looked back at the results of every U.S. Open since 2000 and reviewed the leaderboard after the first two rounds as well as the final four-round standings. We wanted to see if the players who shot best in the first two days carried some type of advantage that would allow them to continue to outperform over the final two days. We found that this wasn’t the case, instead the top performers underperformed while a new group of players fared best over their weekend rounds. On average, 66% of players who found themselves in the top quartile after the second round failed to shoot in the top quartile over the final two days.

This type of mean reversion is not unique to golf, we see this phenomenon occur frequently in the world of investing. Mutual funds that performed the best in previous years routinely fail to outperform over subsequent years. The chart below illustrates these results, showing how the vast majority of past top quartile funds routinely fail to outperform in the following year.

For investors, this is valuable information. Chasing returns and investing with managers who performed well recently is a strategy that is designed to fail and produce poor performance. Rather than chasing past performance, investors are better served to adopt a strategy they can implement and maintain over time. Our client portfolios are built using an evidence-based strategy which ignores short term noise and performance, instead opting to invest in strategies that have been time-tested and align with investors long term goals. 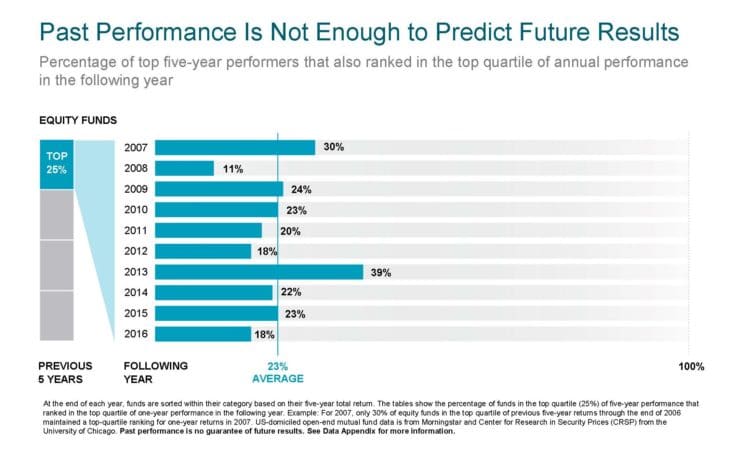